What is Magnetic Declination?

Did you know that magnetic compass does not always point to North? Actually, there are only a few locations on Earth where it points exactly to the True (geographic) North. The direction in which the compass needle points is known as Magnetic North, and the angle between Magnetic North and the True North direction is called magnetic declination.

Magnetic declination varies both from place to place, and with the passage of time. As a traveller cruises the east coast of the United States, for example, the declination varies from 20 degrees west (in Maine) to zero (in Florida), to 10 degrees east (in Texas), meaning a compass adjusted at the beginning of the journey would have a true north error of over 30 degrees if not adjusted for the changing declination. The magnetic declination in a given area will change slowly over time, possibly as much as 2-25 degrees every hundred years or so, depending upon how far from the magnetic poles it is. Complex fluid motion in the outer core of the Earth (the molten metallic region that lies from 2800 to 5000 km below the Earth's surface) causes the magnetic field to change slowly with time. This change is known as secular variation. Because of secular variation, declination values shown on old topographic, marine and aeronautical charts need to be updated if they are to be used without large errors. Unfortunately, the annual change corrections given on most of these maps cannot be applied reliably if the maps are more than a few years old since the secular variation also changes with time in an unpredictable manner. 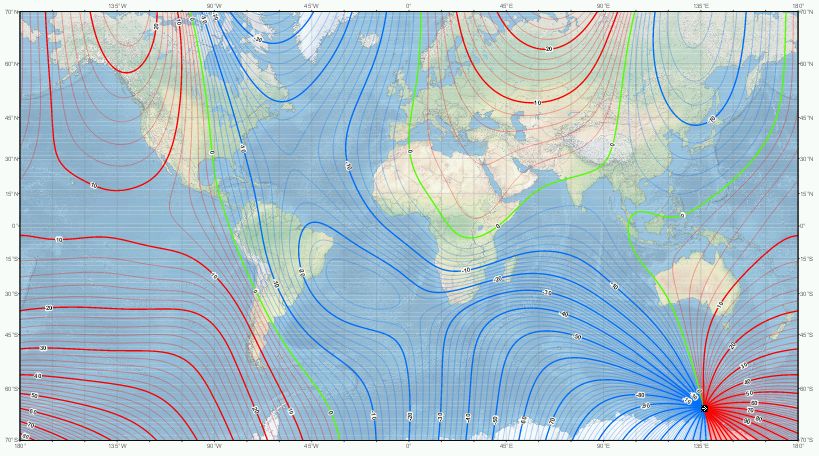 If the compass at your place is pointing clockwise with respect to the True North, declination is positive or EAST

If the compass at your place is pointing counter-clockwise with respect to the True North, declination is negative or WEST


How can we calculate declination at any given place?

One way would be to use declination maps. Unfortunately because of secular variation, declination values are constantly changing. When printed maps were the only way of getting this information, the declination values were somewhat out of date by the time the maps got to the general public.

Another way would be to perform a prediction. This should be based on a world-wide empirical model of the deep flows. This web page operated by the National Geophysical Data Center (NDGC) offers a pretty good value for declination. The model reflects a highly predictable rate of change, and will usually be more accurate than a map, and almost never less accurate.

The best way however is to use the current web site, which offers in a graphical format using Google Maps API the computed declination for any place on Earth. The algorithm implements the World Magnetic Model WMM2020.